PCC Celebrates Class of ’22 during Commencement 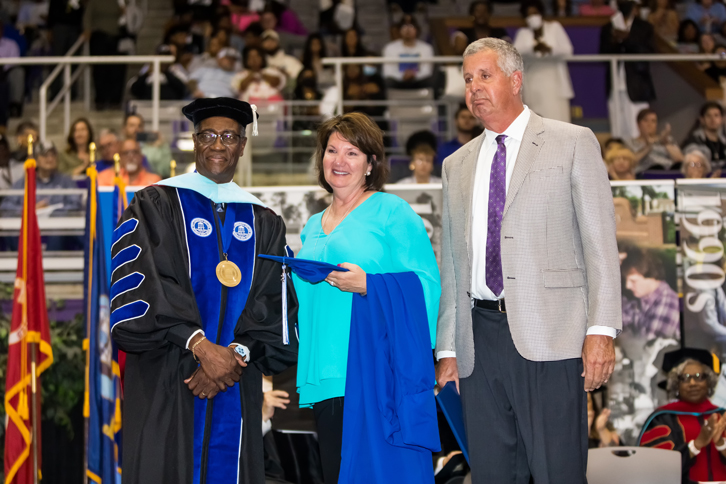 GREENVILLE—Pitt Community College held spring commencement May 10 to put its seal of approval on members of the Class of 2022 and celebrate their achievements, along with family, friends and supporters.

Due to the pandemic, it was the first time in three years the college was able to hold an in-person graduation ceremony in East Carolina University’s Williams Arena. So, for PCC President Lawrence Rouse, it was a welcomed sight to watch more than 400 members of this year’s graduating class march into the facility wearing royal blue caps and gowns.

“Commencement is a time-honored tradition for individuals who deserve public recognition and praise for the sacrifices they’ve made and the time and money they’ve expended in successful pursuit of higher education,” Rouse said. “Not being able to honor graduates in person in the spring of 2020 and 2021 was difficult for everyone at PCC. And though we did our best to show those graduates how proud we were of their achievements through virtual ceremonies, there’s simply no way to replicate the joy, energy and excitement an in-person graduation ceremony generates.”

One-by-one Tuesday evening, Pitt graduates walked across the stage as their names were called to receive academic credentials and pose for a photo with President Rouse. It went on that way for the first several hundred graduates or so, until PCC Construction & Industrial Technology Dean Steve Mathews called the name of William Orville Kuhn III, or “Trey,” as family and friends knew him.

When Trey Kuhn’s name was called, a man and woman stepped onto the stage, and though they were well dressed, they weren’t wearing traditional graduation attire and appeared to be fighting back tears. It was Trey’s parents, Will and Cindy — and they were filling in for their son, who passed away March 15, following a courageous battle with brain cancer.

Born April 3, 1999, Trey Kuhn was pursuing a construction career when he was diagnosed with glioblastoma just a few days before his 21st birthday. The 2018 graduate of Arendell Parrott Academy was taking construction courses at Pitt to follow in the footsteps of his father, owner of Greenville’s Will Kuhn Homes and a member of the PCC Building Construction Technology advisory board.

According to his obituary, Trey spent his final two years battling a terminal disease, “never wanting to be treated like a cancer patient” while serving “as a vessel to help find a cure for what currently has no known cure.” As the obituary stated, he “willingly accepted what he knew was his calling – to help science carve pathways toward cures and to demonstrate faith through bravery and the power of community joining in prayer.”

PCC will award the first Trey Kuhn Memorial Scholarships this fall to students enrolled in building construction-related programs who reside in either Pitt, Beaufort, Edgecombe, Greene or Martin counties. Three awards – worth $2,000, $1,000 and $500 – will be presented each year through the established scholarship fund.

Contributions to the Trey Kuhn Memorial Scholarship may be made on the “Donate Now” page or by contacting PCC Scholarships Coordinator Kim Simpkins at (252) 493-7902.