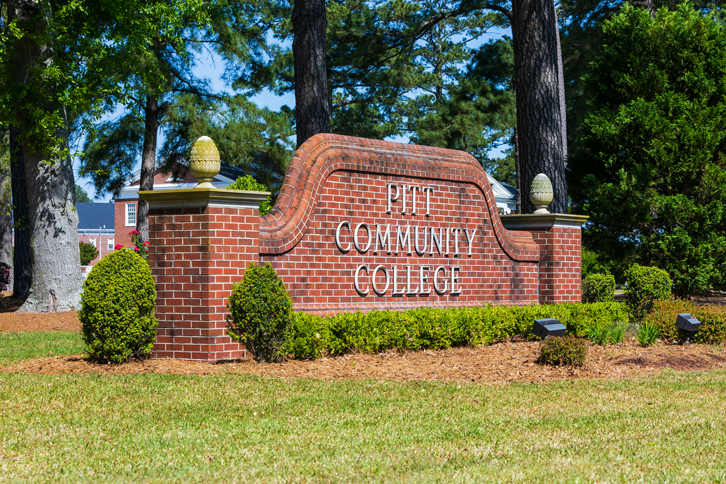 The program took featured the presentation of awards to six individuals in five different categories. Honorees were selected based on criteria established by the PCC Alumni Association Board.

“It’s always a joy to recognize the success of deserving Pitt alumni,” said PCC Development Officer John Bacon. “They have made their alma mater proud and are perfect examples of what can happen when individuals combine their PCC education with hard work and determination.”

In addition to her professional accomplishments, Marsten volunteers with several community organizations. She is a mentor for girls through the Daughters of Worth non-profit group and helped the Pitt County Arts Council at Emerge raise nearly $12,000 for its education and outreach programs.

“I would not be who I am without the opportunities I had at PCC and the people there who saw value in me,” Marsten said upon receiving her award.

Outstanding Alumni Awards were presented to 2009 University Transfer graduate Keoshia Allen and Brian Ennis, who earned an Associate in Science from Pitt in 2015 and an Associate in General Education in 2016. Allen, who earned bachelor’s and master’s degrees in elementary education from ECU, now works as Wakelon Elementary School’s library media coordinator, while Ennis is a pharmacist with O’Neal’s Drug Store in eastern North Carolina.

Tara Hughes, a 2015 Horticultural Technology graduate, received a Young Alumni Award. Hughes is a licensed landscape contractor with her own landscaping company in Kinston.

PCC presented an Honorary Alumni Award to former trustee Max Joyner Sr. for adopting Pitt as his own through “outstanding service, substantial and continuing commitment and loyalty.” An ECU graduate, Joyner excelled in his career with Jefferson Pilot Standard Life Insurance Company. He received the state’s prestigious Order of the Long Leaf Pine in 2014 and was named the Greenville-Pitt County Chamber of Commerce Citizen of the Year in 2016.

Former N.C. Gov. James Holshouser appointed Joyner to an eight-year term on the PCC Board of Trustees in 1972. His loyalty to PCC has never wavered, and in 2017, the college named the auditorium of its new Walter & Marie Williams Building after him in recognition of his outstanding financial support.