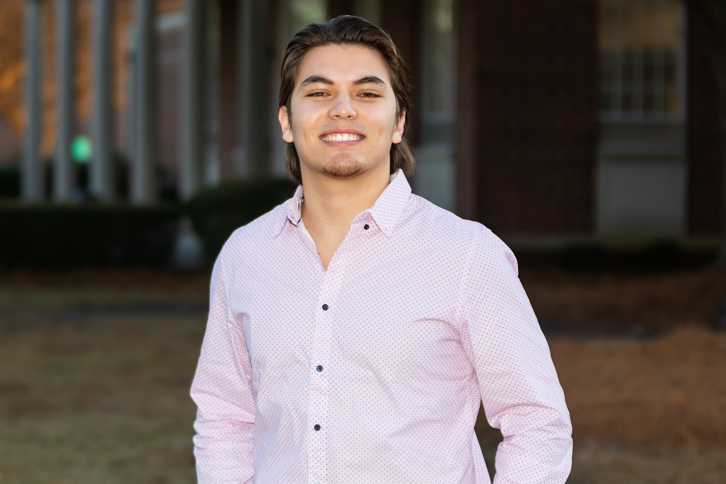 WINTERVILLE—Pitt Community College honored the life of Dr. Martin Luther King Jr. Thursday and, as part of the annual celebration, presented a $1,000-scholarship to a prospective nursing student.

Due to the recent increase in COVID-19 cases nationally, the 10th Annual MLK Jr. Scholarship Tribute was held online. Nevertheless, it featured remarks from Ahoskie Mayor Weyling White and the presentation of the 2022 PCC Multicultural Activities Committee (MAC) Scholarship to Alvaro Ramirez Serafin.

“This scholarship means the world to me,” Serafin said. “After everything my family and I have been through, this was a help that was very much needed during these times.”

Serafin, who is the first member of his family to attend college, says that in addition to pushing him toward his dream of earning a PCC degree, the MAC Scholarship will help ease “some of the financial worries” his pursuit of higher education has given his father.

“After giving my father the [scholarship] news, I was so glad to see relief on his face, knowing that his son is doing the right things,” he said. “We really could not be more grateful to the people who made this possible.”

Born in Mexico, Serafin came to the United States when he was 5 years old. He’s lived in North Carolina the past 15 years and is a 2020 graduate of D.H. Conley High School, where he was a four-year member of the varsity soccer team and Pitt County Schools Health Sciences Academy participant.

In addition to his academic pursuits, Serafin is active in his church and a tireless volunteer. He’s spent more than 350 hours helping out at Hope of Glory, a charity-based shop in Greenville. He says it’s given him a chance “to meet some great people” who have taught him valuable life lessons.

“(It’s) helped me put goals in my life, such a becoming a nurse, leading worship at my church, and being able to help anyone ever in need,” he says. “I had a lot of people lead me to this point in my life, but I really dug deep within myself to find what I really wanted to do in life.”

Serafin says he discovered he’s a “people person” with leadership ability and noted that he’s put the needs of others ahead of his own for as long as he can remember. He also realized he has a knack for making “people smile and laugh” and said pursuing a nursing career puts him in the best position to use his talents to help those who are suffering.

“Many people out there are neglected and feel lost,” he said. “The nursing program will give me a chance to work in a job I love and help people at the same time.”

For now, Serafin is enrolled in PCC’s Associate in General Education program as he works to complete Associate Degree Nursing admission requirements. He says he is doing his best to honor the scholarship donors who have invested in him and plans to apply to the nursing program this spring.

“The MAC Scholarship will not only help me and my family financially, but it has also shown me that there are people in this world who are here to help you overcome obstacles,” Serafin said. “I want to be one of them.”

Each year, the MAC Scholarship is presented in honor or memory of someone in the community who shares King’s ideals. This year’s award was presented in honor of Dr. Paul Cunningham, a retired surgeon and former dean of East Carolina University’s Brody School of Medicine.

Donations toward future MAC Scholarships can be made by visiting the PCC Foundation website (https://bit.ly/mlktribute22).