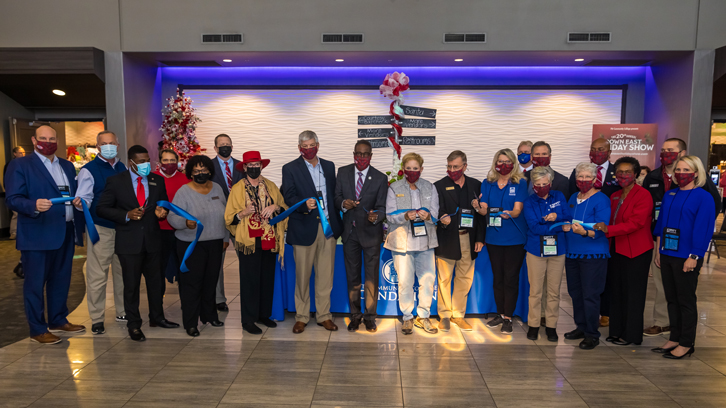 WINTERVILLE—Pitt Community College Foundation officials are thanking the community for its “outstanding support” of the 2021 Down East Holiday Show.

According to PCC Foundation Executive Director Beth Sigmon, more than 10,000 shoppers came out to the Greenville Convention Center Nov. 4-7 — almost 600 more than attended the 2019 event. Their patronage, she said, made the charitable organization’s most important annual fundraiser a rousing success.

“The Holiday Show significantly impacts the PCC Foundation’s ability to provide student scholarships and support educational activities,” Sigmon said. “Returning to the convention center gave people an opportunity to get out and about and feel a sense of normalcy, and that had a direct influence on attendance.”

Though the fundraising amount from this year’s show – the PCC Foundation’s 20th – is still being tallied, it’s a safe bet it’ll be substantially higher than the total generated by last year’s virtual event. After 18 years of holding the show in person, the foundation was forced to move the 2020 event online because of the pandemic.

“After the 2019 Down East Holiday Show generated almost $143,000 for the PCC Foundation, we ended up raising less than $11,000 through our 2020 event,” Sigmon said. “Part of the show’s appeal is interaction with vendors and catching up with people we’ve come to consider friends. COVID-19 took that away last year and participation suffered, as did the foundation’s ability to support Pitt students.”

This year’s Holiday Show started with a bang. Sigmon said 1,566 shoppers came out for Thursday’s adult-only shopping opener, an attendance record for the special event.

“Every dollar raised through the Holiday Show supports PCC students and their efforts to improve their lives through higher education,” Sigmon said. “With the rising cost of living, particularly with regard to transportation and food, the need is great. We’re happy the success of this year’s show will increase the foundation’s ability to fulfill its educational mission.”

Approximately 100 of the more than 190 vendors featured in the 2021 Holiday Show have already signed up for next year’s event, which will take place Nov. 3-6.