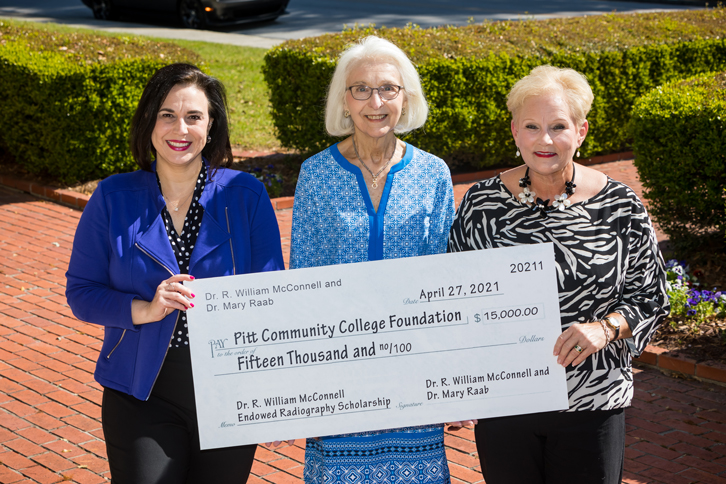 WINTERVILLE—With an initial contribution of $15,000, Dr. Mary Raab has begun the process of establishing a scholarship endowment with the Pitt Community College Foundation to honor her husband, Dr. R. William McConnell.

For Raab, it’s the latest act of altruism in a life spent serving the people of eastern North Carolina. As an oncologist, she’s fought cancer for more than 40 years. And while many of her philanthropic pursuits—and those of her first husband, Dr. Spencer Raab, who passed away in 1993—have supported those efforts, the R. William McConnell, MD Endowed Radiography Scholarship will aid Pitt students enrolled in radiography training.

McConnell, also a noted philanthropist, is a founding partner of Greenville’s Eastern Radiologists. He served as chief of medical staff at Pitt County Memorial Hospital before it became Vidant Medical Center.

“Dr. McConnell and Dr. Raab have been incredibly gracious to our community, and when they extended their friendship to Pitt Community College, they did so with the intent of doing even more,” said PCC Scholarships Coordinator Kim Simpkins. “Having been fortunate enough to receive support during their respective journeys to success, they understand the importance of scholarship funding. The legacy they’ve created with our foundation will have a profound effect on PCC radiography students for many years to come.”

Simpkins said the first scholarship to be awarded through the McConnell Endowment will be worth $600. It will be presented during the 2021-22 academic year, she said, to a full- or part-time student in any of PCC’s radiography-related certificate or degree programs.

To be eligible for the annual scholarship award, students must have a GPA of 2.5 or higher. Simpkins says financial need will also be considered in the selection of recipients.

Raab’s service to eastern North Carolina began in 1977, when she and husband, Spencer, moved to the area to become faculty members with East Carolina University’s medical school. The pair would play a key role in the establishment of the Leo W. Jenkins Cancer Center and forming outreach clinics throughout the region for patients to receive quality cancer treatment closer to their homes.

After Spencer’s passing, Mary Raab continued working to improve the lives of those affected by cancer. In 2001, she and McConnell were recognized for leading the fundraising effort to establish the American Cancer Society’s McConnell-Raab Hope Lodge. The Greenville facility, which provides free housing for cancer patients and their caregivers, opened 19 years ago this month.