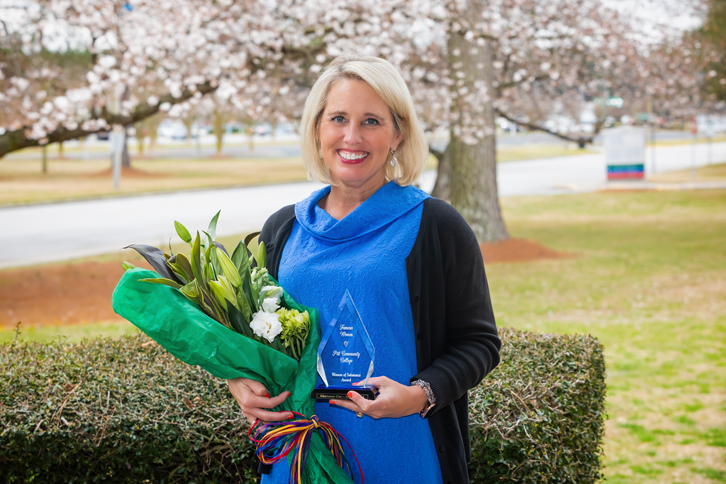 WINTERVILLE—For the past 10 years, Pitt Community College Vice President of Institutional Advancement Marianne Cox has gone about her work far removed from the spotlight and with little fanfare.

If it were up to her, that’s how things would always be. But on Wednesday, PCC capped off its annual Women’s History Month celebration with a virtual program that featured Cox receiving the college’s 2021 Woman of Substance (WOS) Award.

“I am truly honored to receive the Woman of Substance Award,” Cox said. “When I look at the lists of previous recipients and this year’s nominees, I am grateful to have even been considered for this honor, let alone receive it.”

“PCC is changing lives for the better every day, thanks to many amazing and dedicated employees, past and present, and I am so blessed to be able to see it firsthand and play a role in it.”

Cox, one of 10 WOS nominees, joined PCC in 2011 as coordinator of the VISIONS Career Development and Scholarship Program, which has helped more than 1,000 Pitt County high school students at risk of dropping out, receive diplomas and move into college and/or the workplace. She was named the program’s director in 2015 before being promoted in 2018 to assistant vice president of Institutional Advancement (IA).

Staff who nominated Cox for the WOS Award, which was established 20 years ago to recognize and encourage outstanding women role models on campus, cited her kindness, commitment to PCC and its students, work in the community and IA leadership. Each one of the staff members she supervises endorsed her nomination.

“Marianne’s taken 18 very different people and created a cohesive and supportive team, without anyone having to sacrifice who they are as a person,” said Tamsey Evans, PCC Resource Development/Donor & Data Specialist. “She shows love to everyone and encourages them to show love to others. She’s also very organized, takes copious notes during meetings, encourages ‘out-of-the-box’ thinking, and knows how to calm someone who’s upset.”

PCC Marketing Director Jane Power agreed. “I have great respect for Marianne and her leadership style,” Power said. “She leads by example, with respect and empathy, and challenges us to be our best selves.”

In addition to supporting PCC Foundation staff throughout the pandemic, which has required significant changes to fundraising events and additional communication with donors, Cox assisted their efforts to secure a $2 million-matching donation from the Eddie and Jo Allison Smith Family Foundation for VISIONS by raising $1 million in 2019. She is continuously striving to improve internal campus communications, increase student access to technology needed for online courses, and is presently focused on getting construction of the Eddie and Jo Allison Smith Center for Student Advancement underway.

“In many ways, Marianne’s a lot like that proverbial duck swimming across a pond, appearing to glide across the water with little effort but paddling furiously below the surface to ensure whatever she’s working on gets her best effort and succeeds,” said PCC Media Relations Director Rob Goldberg. “She’s reluctant to accept credit for ‘wins,’ quick to accept blame and make amends when something goes awry, and even quicker to praise her colleagues.”

A Kentucky native, Cox and her husband, Joe, a college pastor with Covenant Church, have lived in Pitt County for more than 20 years. They have two grown children, Madeline and Hayden.

As a pastor’s wife and daughter of an elementary/middle school teacher and interdenominational minister, Cox’s record of community service is extensive. In addition to mission work in Jamaica and Nicaragua, she and her husband made their house a ‘home away from home’ for many college students prior to the pandemic.

One of Cox’s most significant contributions to the community, according to her husband, has been her work as a mentor to young women in her church.

“Marianne’s mentored generations of young ladies and remains in contact with each one of them to this day,” Joe Cox said. “To Marianne, mentoring is a major commitment, and she is a natural at knowing when to be by her mentee’s side in times of crisis and when to back off but remain in touch.”

Prior to the award presentation, Pitt’s women’s history program featured original poetry by PCC English Instructor Regina Garcia and a performance of “Sojourner Truth: A Legacy” by professional storyteller Sandra Jones. It also included a discussion of this year’s national Women’s History Month theme, “Valiant Women of the Vote: Refusing to be Silenced,” by Minerva Freeman, a voter registration and education advocate, and Jo Nicholas, president of the League of Women Voters of North Carolina.