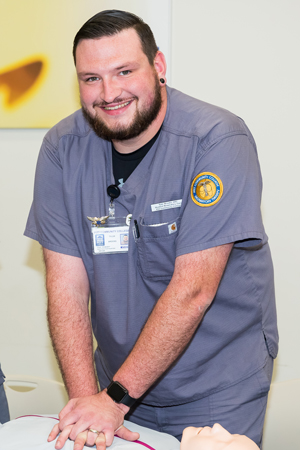 GREENVILLE—Though he’s been on the job a little less than a year, Pitt Community College graduate Tyler Brooks has already been honored for his work as a registered respiratory therapist with Vidant Medical Center.

Brooks, a 2020 Respiratory Therapy (RT) grad, was announced last month as a 2021 PHIL Award recipient. The honor is presented by the FACES (Family And Caregiver Education & Support) Foundation, a national nonprofit organization with a mission to “acknowledge and promote professional excellence in the education and care of patients with life-threatening pulmonary illnesses.”

In a social media post following the award announcement, Brooks stated that he was “completely humbled and honored” to have won the PHIL Award. “I work with great people and for a great organization that allows us to grow and provide compassionate care,” he added.

PHIL Award Recipients have been nominated for the recognition by patients and their family members and/or other caregivers. In addition to earning status as one of the country’s best in respiratory care, honorees receive an ‘Appreciation Sculpture’ and paid tuition to attend their state’s annual professional conference for respiratory therapists.

PCC Respiratory Therapy Program Director Rusty Sugg said he felt a sense of pride upon learning of Brooks’ award, adding that it was “well deserved.” Sugg nominated Brooks for an Academic Excellence Award when he was still enrolled as a Pitt student last spring, citing his leadership qualities, motivation to be successful in the RT field, and ability to respond to challenging situations.

“I knew from day one in the Respiratory Therapy Program that Tyler was going to make a positive impact in the profession,” Sugg said. “He was knowledgeable, proactive, and had excellent communication skills with patients and other health care providers.”

Brooks started working at Vidant in April 2020, following the initial coronavirus outbreak. He was one of eight RT students from PCC to join the fight against COVID-19 after the N.C. Respiratory Care Board held an emergency meeting in March to reinstate the Respiratory Care Assistant program. The decision allowed respiratory therapy students to work under the supervision of licensed respiratory therapists and was made in response to the pandemic’s severity.

An Ayden resident, who is originally from Jacksonville, Fla., Brooks worked as a paramedic before returning to school to study respiratory therapy. He is the fourth RT graduate from PCC to receive the PHIL Award, joining 2020 recipient Martha G. Morgan, who graduated in 1991, 2019 recipient Bonnie Landeck, a 2000 graduate, and Christopher Denmark, a 2012 graduate who won the award in 2017.

“The PCC Respiratory Therapy program is extremely proud of Tyler and all of the past PHIL Award recipients from the college,” Sugg said. “The faculty and I wish them continued success.”

Established in 2006, the FACES Foundation advocates for individuals living with pulmonary illnesses, their support networks, and the respiratory therapy professionals who care for them. The PHIL Award was created the same year to honor Philip C. Lamka, who passed away from Interstitial Lung Disease. It is the foundation’s signature program and is presented annually by hospitals throughout the country to “unsung heroes in the respiratory profession who understand that each breath matters.”