Foundation Honors Minges for Service as Board Chairman 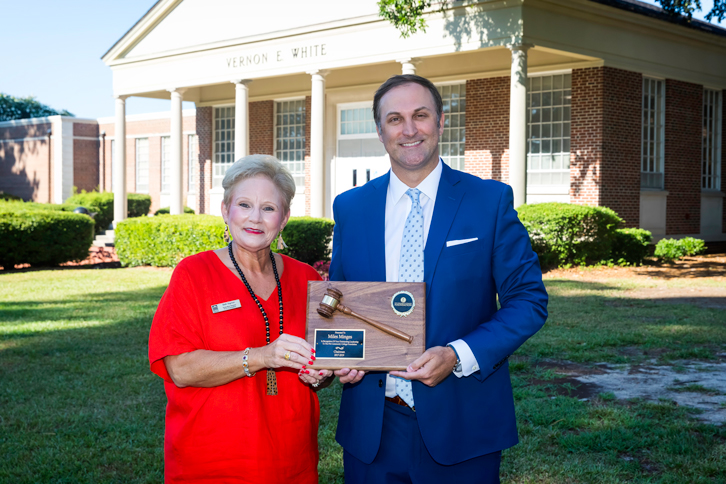 Minges, who is vice president of sales and marketing with Ayden’s Minges Bottling Group, has served in various capacities on the PCC Foundation Board since joining it in late 2011. His service as chairman ran from 2017 to 2019.

“Miles has been an outstanding and active member of the PCC Foundation, and we are truly grateful for his leadership and encouragement to not only get fellow board members involved with fundraising activities but local business and industry as well,” said PCC Foundation Executive Director Beth Sigmon.

A Greenville resident, Minges was the foundation board’s chairman when he co-chaired its Champions Committee. That group was responsible for initiating the PCC Foundation’s capital campaign to generate revenue for construction of the Eddie & Jo Allison Smith Center for Student Advancement and raising more than $1 million to match a $2 million-pledge from the Eddie & Jo Allison Smith Family Foundation in support of PCC’s VISIONS Career Development and Scholarship Program.

“I’m extremely honored to have led and served with a great group of individuals in my position as chairman of the PCC Foundation Board,” Minges said. “The hard work and vision from our committees and board members behind the scenes has been the backbone of the foundation. It’s imperative that we as board members continue to remain active in promoting Pitt Community College’s mission and maintaining and growing the relationships the PCC Foundation has established over the years with so many individuals and businesses in the community and across eastern North Carolina.”

Minges says he will continue serving as a PCC Foundation Board member and support new Chairman Randy Collier’s efforts to successfully reach the capital campaign’s $10 million-goal. The campaign has raised $8 million thus far through cash donations, pledges and bond funding.