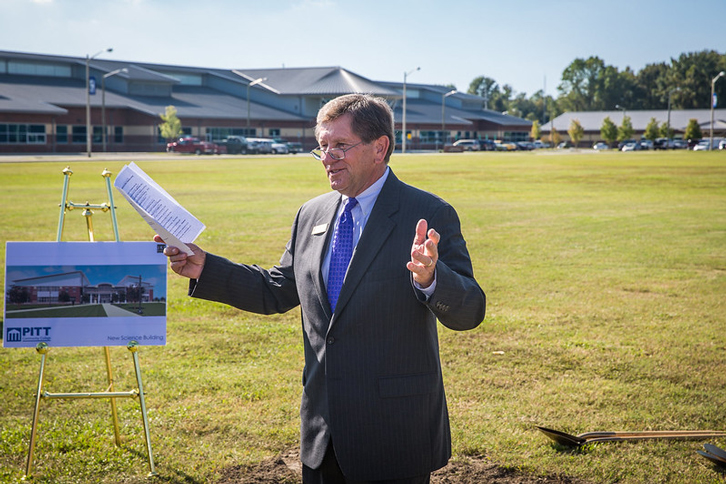 A trustee since 2007, Long will step down from PCC’s governing board when his term expires June 30. He will be replaced by Lindsey Griffin, a longtime PCC Foundation Board member and former owner of a Greenville landscaping company.

A Pitt County Board of Education appointee, Long says serving as a PCC trustee has been an honor. The Farmville resident brought a wealth of educational administration experience to the board after spending most of his life working in public schools as a teacher, director and high school principal.

“I consider myself a ‘high school principal,’ because that is where I spent 22 years of my career,” he says. “… Considering that I began work in the public schools on Dec. 1, 1969 and will resign from the PCC Board of Trustees on June 30, 2020, I’ll have 50 years and seven months of service to public education in North Carolina.”

A Northampton County native, Long spent much of his professional career in Pitt County. His service on the PCC Board of Trustees, he says, was “a way to ‘pay back’ Pitt County for a very rewarding public education career” and to stay involved with education.

Long served on the board’s Policy and Program, Building and Grounds, Finance and Audit, and Personnel committees. He was also an Executive Committee member from 2011 to 2020, with stints as secretary, vice-chair and chair.

“With 13 years of trustee service, I had many rewarding and memorable events,” Long said. “Being a Board of Education appointee, if I had to select one, it would have to be the growth in partnerships between the public school system and the college, with particular emphasis on the Early College High School (ECHS) and the Technical Academy program.”

ECHS, which opened in 2015, and the academy, which started in 2018, illustrate the partnership between Pitt County Schools and PCC to create unique educational opportunities for local high school students.

Long says his fondest memories as a trustee will be the people he worked with on the board. “I will always remember opportunities to serve and to learn from other great trustees, like Walter Williams, Paul Davenport, and many others,” he said. “I will miss serving. However, I must say that it is my belief that any elected or appointed official should serve a limited (time). For me, I believe that to be three terms.”

As he enters his final month with the PCC Board of Trustees, Long says Pitt’s future is “brighter than it has ever been.” He says he “would not hesitate” to congratulate his grandchildren in they choose to attend PCC, adding that the college is a “well-respected” and excellent option for higher education.

“We are … at a point in time where most people realize that a traditional four-year college degree may not be the only or best option for post-secondary education,” Long said. “I have had the opportunity to see many four-year graduates return to our community college to prepare for a career (after) learning that the four-year degree they earned did not provide employment.”

PCC Trustees established the Distinguished Service Award in 1989 to recognize individuals who have made outstanding contributions to Pitt’s mission and services. The honor is normally presented during spring commencement but was awarded during the trustees meeting because the PCC Class of 2020’s in-person graduation ceremony was canceled due to the coronavirus.