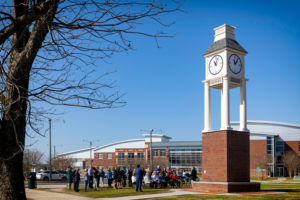 PCC employees and supporters gathered on campus Thursday morning to dedicate the college’s Edward and Joan Warren Clock Tower. The 35-foot tower was purchased through funding from the Warren Estate as a gift to the PCC Foundation. Ed Warren, a former state senator and PCC employee, and his wife, Joan, a former PCC trustee, were longtime supporters of the college before passing away in 2003 and 2002, respectively.