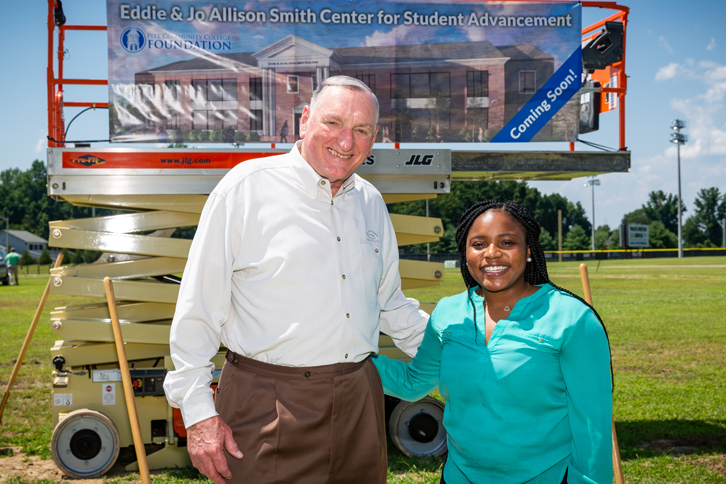 WINTERVILLE—The Pitt Community College Foundation’s yearlong campaign to raise funding for the college’s VISIONS Career Development & Scholarship Program went down to the wire but ended up meeting and ultimately surpassing its $1 million-goal.

For the past year, PCC’s chief fundraising organization has focused on securing funds to match a significant financial pledge from the Eddie & Jo Allison Smith Family Foundation. The Smiths, who are longtime PCC supporters, promised to provide as much as $2 million to VISIONS by matching every dollar the PCC Foundation raised for the program in 2019 with $2 from their charitable organization.

“I was amazed by the Smiths’ generosity and the support the campaign received locally,” Sigmon said. “We live in a wonderful community that truly understands the importance of education and the value in reaching out to others in need of a helping hand.”

In addition to thanking the Smith Family Foundation and members of the community for their VISIONS support, PCC Vice President of Institutional Advancement Marianne Cox thanked everyone involved with organizing the fundraising campaign and making sure it was successful.

“Our president, Dr. Lawrence Rouse, and PCC Trustees got behind this campaign from the start and never wavered in their support,” Cox said. “At the same time, we had PCC Foundation Board members and numerous employees contributing their time, talents and finances to ensure its success.”

In the more than 15 years since VISIONS began through a partnership between the PCC Foundation, Pitt County Schools and the Smith Family Foundation, nearly 1,000 Pitt County high school students have received the guidance and support they needed in order to complete high school and move into higher education and/or the workplace.