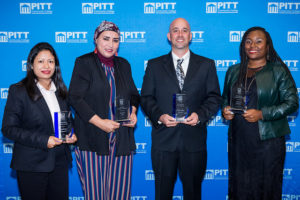 “This year’s honorees are prime examples of how Pitt Community College educates and empowers people for success,” said PCC Alumni Board Chair John Carrere. “Whether it’s leadership within their professions or contributing to their local communities, we’re always eager to recognize alumni who demonstrate what is possible with a PCC education.”

Carrere said this year’s honorees were selected by a special committee, based on criteria established by the PCC Alumni Association Board.

“So many of our graduates make positive contributions to their local workforces and communities, and they deserve recognition for their achievements,” Carrere said. “The alumni awards ceremony is a chance for PCC to celebrate former students who have excelled at applying the education they received at the college to their careers and daily lives.”

A 2014 graduate, Zannat earned an Associate in Science Degree at PCC before moving on to Creighton University and completing a degree in pharmacy. She is currently a licensed pharmacy intern in Williamsburg, Va., awaiting her licensure examination results.

Zannat, who has also earned degrees from universities in Bangladesh and Japan, was exceptional in the classroom and in service to the community as a Pitt student. Considered a “patient and methodical” problem-solver by PCC Science Department Chair Jeff Rorer, she was a 2014 Academic Excellence Award recipient and a Dean’s List student in every semester.

In addition to supporting the communities in which she has lived in other countries, Rorer says Zannat has volunteered with the American Red Cross, a Virginia elementary school health fair, and at blood pressure screenings. He said she also enjoys teaching others about science and helping them learn English.

Grace, a 2004 graduate with a degree in construction management, combined the knowledge he received at PCC with the experience he gained as a job superintendent for a local builder to become a licensed general contractor. He is president of the Greenville-Pitt County Home Builders Association, and, since 2011, has owned and operated Matthew Grace Construction, Inc.

Grace was nominated for his award by his mother, Vickie, who noted the many hours her son has volunteered to help advance and promote the local building industry. She added that he is “always willing to help new builders with recommendations” and that his business “emphasizes trust, devotion, accountability and teamwork.”

Ali graduated with an associate degree in Early Childhood Education in May, capping a remarkable PCC career that included Academic Excellence Awards from the N.C. Community College System and PCC, the 2017 State of Mind Award from the National Society of Leadership and Success, and PCC Scholar of Global Distinction honors. She currently teaches part-time at Children’s Campus of Greenville and is a private tutor for children ages 4-10 years old.

A native Egyptian, Ali had already earned a bachelor’s degree in Arabic and Islamic Studies by the time she moved to the United States more than 15 years ago. And despite her academic responsibilities and duties as a mother of four, she still made time for community service while enrolled at PCC, volunteering at The Oakwood School several hours each week and chairing the school’s International Festival Committee.

“(Amira’s) participation and desire to make a difference continues through her service to her community,” said PCC Developmental English Instructor Regina Garcia. “This ‘Ali Brand’ of service promotes the creative and global knowledge and awareness of young people in her community ….”

A 2014 Pitt graduate, Waller moved on to East Carolina University after completing her associate degree and ultimately earned a master’s in Counseling Education. She now works as a counselor in PCC’s Student Development Services Division.

“Mecca is well-respected by her peers and is known for her warm service to students,” said Carrere, who nominated Waller for her award. “She has involved herself on campus as an advisor for the Circle of Sisters Club, guides new students through the enrollment process, gives testimony as a first-generation student for the TRiO Student Support Services program, and assists with gathering items for the Student Development Services food pantry to provide for students in need.”