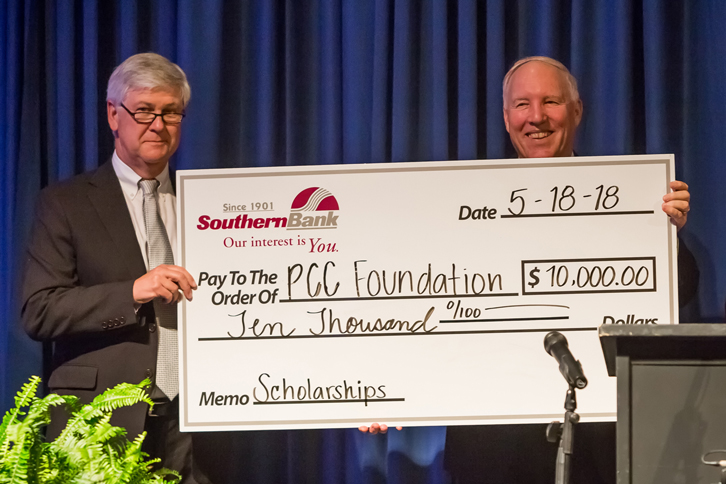 Southern Bank’s Charlie Wells (left) and Dr. G. Dennis Massey hold a check while announcing the creation of a new scholarship with the PCC Foundation in honor of the retiring president.

WINTERVILLE—The Pitt Community College Foundation held a fundraiser in honor of retiring President G. Dennis Massey this month and utilized the opportunity to announce the creation of a scholarship in his name.

During the President’s Scholarship Gala on May 18, Southern Bank presented a $10,000-check to the PCC Foundation for the purpose of establishing the Dr. Dennis Massey Endowed Scholarship. Following the announcement, it took just minutes for gala attendees to raise another $4,000 to help with endowing the scholarship.

“The expansion of scholarship opportunities is a primary goal of the PCC Foundation,” Massey said. “… I am grateful to Southern Bank and all who are contributing to the endowed scholarship in my name as a part of that overall effort.”

Massey, who has been PCC’s president since 2003, announced in the fall that the 2017-18 academic year will be his last with the college, though he will remain an active supporter of PCC activities even after his retirement. The legacy he leaves behind at Pitt will be one of considerable growth with regard to enrollment, facilities and acreage.

PCC, which is currently the state’s sixth-largest community college in terms of student credit hours, serves more than 23,000 students in credit and non-credit programs annually—approximately twice as many as when Massey joined the college. Of the 18 buildings on the college’s main campus, nine were constructed with Massey at the helm.

PCC Vice President of Institutional Advancement Susan Nobles said that in addition to raising money for student scholarships, the gala was a way to honor Massey for his outstanding accomplishments at Pitt and in the community.

“The gala allowed friends of the college to gather and present special tributes and to have an opportunity to personally congratulate Dr. Massey,” she said, adding that the new scholarship will ensure future PCC students are well aware of his 15 years of remarkable service to the college.

“The Dr. Dennis Massey Endowed Scholarship will assist students for many years to come,” Nobles said. “It is a great way to remember Dr. Massey’s legacy of outstanding leadership at PCC.

Held at Rock Springs Center in Greenville, the scholarship gala featured remarks from a number of individuals associated with PCC, a tribute video, and the presentation of several awards to Massey, including Phi Theta Kappa Honor Society’s Michael Bennett Lifetime Achievement Award and the Winterville Chamber of Commerce’s Education Leadership Award. Additionally, State Rep. Jean Farmer-Butterfield and State Sen. Don Davis delivered a letter from Gov. Roy Cooper to Massey honoring him for meritorious service to the State of North Carolina. They also gave him a state flag that flew over the Capitol Building in Raleigh earlier this month.

“It was amazing to see the community support for Pitt Community College and our students,” Massey said of the gala. “This support truly validates the work that I have led here at PCC over the past 15 years for student success and service to the region’s economic development, especially to employers.

“I was impressed with the broad participation of alumni, community leaders and elected officials,” he continued. “I was also glad to see the historical context and value of PCC to people striving to better themselves for their families and friends.”

More than 325 attended the gala – including Massey’s sons, Ken and Sam, and five grandchildren – helping raise more than $40,000 for student scholarships and educational activities at PCC. In addition to dinner and dancing, the event included a silent auction and live music by the Emerald City Big Band.