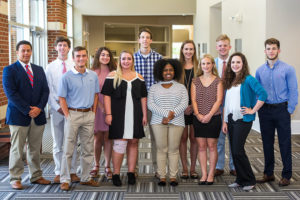 WINTERVILLE—Pitt Community College’s newest student ambassadors met for the first time this month to begin preparations for their duties during the 2018-19 academic year.

The 12-member group, which features nine new faces and three returnees, will assist PCC staff with recruiting and various college-related events throughout the coming academic year. The students, who receive full-time scholarships from the PCC Foundation, must also perform weekly service hours on campus and maintain at least a 3.2 GPA.

“We had more than 35 applicants this year, and there were some really great students wanting to participate,” Bacon said. “While that made it tough to select just 12, we took an objective look at each applicant’s academic achievements, leadership potential and community involvement and chose the students we felt would best represent PCC and our new president, Dr. Lawrence Rouse, during the upcoming academic year.”

Bacon described the new ambassador group as “eclectic” and enthusiastic about carrying on a tradition of excellence that began more than two decades ago.

“PCC Student Ambassadors have been outstanding representatives of the president and PCC Foundation since 1992,” he said. “This year’s group, which includes students preparing for careers ranging from health sciences to coaching athletics to small business ownership, is diverse, talented and eager to be the face of PCC.”

Weathers, a South Central High School graduate, plans to complete Pitt’s nursing curriculum through the Regionally Increasing Baccalaureate Nurses (RIBN) program. As an RIBN participant, she will transfer to East Carolina University for a bachelor’s degree in nursing, once she has earned an associate degree. She ultimately wants to help deliver babies as a midwife.

“The Student Ambassador Program enabled me to be involved in the community and with students at PCC,” Weathers said. “I wanted to be a part of that, again.”

Williams, a D.H. Conley graduate, is taking University Transfer courses in order to pursue a career as a high school social studies teacher and football coach. In addition to being an ambassador, he is part of PCC’s VISIONS Career Development and Scholarship Program, which provides mentoring and academic support measures to its college participants.

Originally from Wilmington, Woolard’s career goal is to become a physician’s assistant. She is majoring in Medical Sonography and is also a member of the PCC cheerleading squad. She and her husband, Nathan, have a daughter, Avery.

Like Weathers, Anderson and Jones are also pursuing nursing degrees through RIBN. Anderson, a Parrott Academy graduate from Winterville, and Jones, a D.H. Conley graduate from Ayden, both say they want to become nurse anesthetists.

Dees, a college transfer student from Greenville, plans to open a restaurant someday. He says he applied to the ambassadors program “to make an impact on the PCC community.”

A Business Administration student, Fisher also plans to be his own boss or work with family members in insurance and real estate. The Greenville Christian Academy basketball standout, who scored 1,000 points during his high school career, says the ambassador program is another challenge he is ready to undertake.

“I wanted to push myself to do my best in everything I do,” Fisher said. “And I love to help others.”

For Moore, a home school graduate from Winterville, the decision to enroll at PCC was simple. “I fell in love with the PCC campus, staff and students when I first attended as a Career and College Promise student,” she explained, adding that she wants to prepare for a job in which she oversees a company’s creative output.

For Perrini and Simpkins, being a student ambassador means carrying on a family tradition. Perrini, a university transfer student pursuing a career as a speech pathologist, is following in the footsteps of her sister, Savanah, who was an ambassador during the 2016-17 academic year. Simpkins—whose brother, Blake, was an ambassador the past two years—is taking college transfer courses to become a certified public accountant.

Smith, a Winterville resident and D.H. Conley graduate, plans to enroll in nursing at Pitt. And, just like Anderson and Jones, she is pursuing a career in anesthesiology.

Rounding out the ambassadors group is Wright, a North Pitt graduate from Greenville. A fitness enthusiast, he plans to enroll in PCC’s Occupational Therapy Assistant (OTA) program to become a certified OTA.

In August, ambassadors will participate in leadership training that includes communication and public speaking tips, meetings with PCC administrators, and guidelines for campus tours and registration day assistance.