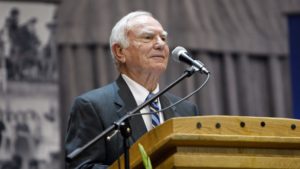 WINTERVILLE—Walter L. Williams, one of Pitt Community College’s most ardent supporters and an advocate for eastern North Carolina, in general, passed away this morning (March 5, 2018). He was 88.

Williams, a Greenville native, considered PCC “an investment in the area’s future.” He served as a PCC Trustee from 2005 to 2017, working on numerous college committees, including Building and Grounds, Finance and Audit, and Personnel. He was one of only three honorary trustees in PCC history at the time of his passing.

“Walter and his wife, Marie, saw the value of PCC to this community in many ways, including character-building,” PCC President G. Dennis Massey said. “Walter spoke softly, but everyone listened carefully to what he said.

“He was a strong advocate for the little guy, and he was proud of PCC’s dedication and cost-effectiveness,” Massey continued. “We will miss his leadership, but he will remain an inspiration to all who knew him or benefitted from his very big heart.”

A two-time graduate of East Carolina University, Williams’ support for his alma mater was unwavering. His commitment to PCC was much the same. As co-chair of Pitt’s Futures First Capital Campaign, he helped raise $8 million for new technology, student scholarships and construction of a 34,000-square-foot addition to the college’s health sciences facilities in 2008 – the same year he received the Greenville-Pitt County Chamber of Commerce’s inaugural Legends Award for exemplary contributions to the community.

“You can go through life coasting or floating along, or you can be aggressive,” Williams said of the capital campaign. “If the leadership and citizens of Pitt County want Pitt Community College to be on the cutting edge, then we need to move forward, and the capital campaign is just part of moving forward.”

Having grown up on a tobacco farm near Greenville, Williams believed that hard work and supporting family were essential to a successful life. Throughout his career with Trade Mart—a chain of gas stations and convenience stores he founded in eastern North Carolina—he practiced what he preached.

Several years ago, when the Baptist Children’s Homes of North Carolina honored Walter and Marie Williams, the organization summed up the couple’s dedication to helping others as follows: “Early in life, Walter Williams adopted a formula that defines who he is: love God, work hard and bless others. Walter and his wife, Marie, have dedicated themselves to using their resources to give hope to others, especially children and young adults. As a rookie teacher, then a businessman, and founder of his own business, Walter believes in investing in people by doing the right thing and giving generously.”

PCC presented Williams with an Honorary Alumni Award in 2010 as well as a Distinguished Service Award during last year’s graduation ceremony. PCC Trustee Don Mills noted that it was fitting that Williams received his service award from the college in an ECU facility that bears his name, Williams Arena at Minges Coliseum.

“Mr. Williams has frequently served as the legislative liaison with elected officials of the North Carolina General Assembly for the Board of Trustees,” Mills said. “His counsel has been invaluable in advocating for community college budget priorities.”

Three months after commencement, PCC dedicated the Walter and Marie Williams Building, a 78,000-square-foot facility that serves as the home of PCC’s Science, Technology, Engineering and Mathematics (STEM) programming.

“This building, in my opinion, is to help people help themselves,” Williams said during the Aug. 2 dedication ceremony. “Without the buildings that are on this (campus), we’d have a lot of people with no job and no technical know-how to work a job.”

“Walter personally volunteered for several years to work as a greeter with me, Foundation Board members and Institutional Advancement staff at the front door of the Down East Holiday Show,” she said. “He told me he enjoyed greeting the people who came out to the event and supporting the PCC Foundation. Our guests and shoppers at the Holiday Show were delighted to see Mr. Williams working side-by-side with us at the front door.”

Nobles said Williams was a valuable member of the college’s leadership team, citing his business experience, work ethic, concern for the community’s well-being and generosity. She added that his contributions to the PCC Foundation encouraged other members of the community to support the college as well.

“Mr. Williams has been a true advocate for Pitt Community College for many years, and he has generously supported the college and our students’ success,” Nobles said. “A few weeks ago, I visited him at Cypress Glen. He reminded me that day how proud he was of the many accomplishments by PCC and the PCC Foundation. He said he was very proud of the college’s role in preparing many local citizens for local careers.

“He surely will be missed.”