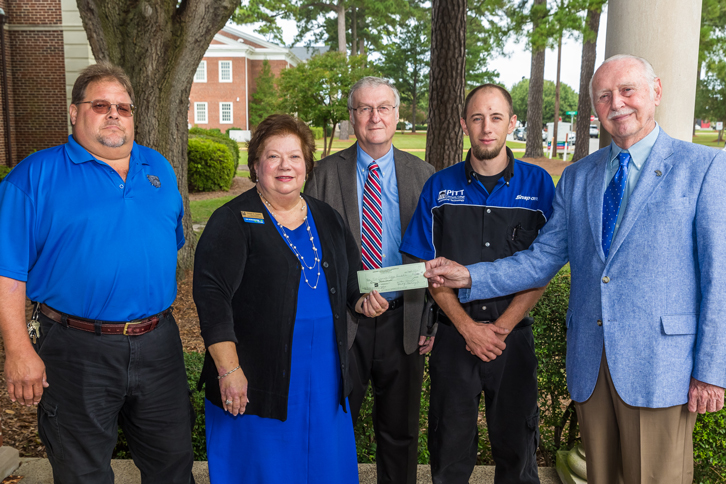 Sweezy, a Greenville resident and 2006 graduate of South Central High School, is in the second year of the Automotive Systems Technology (AST) program. The Ricks Automotive Scholarship he received provides $500 toward his educational expenses this fall and $500 more in the spring – welcome news to Sweezy, who is married and has two young daughters.

“Being 29 years old and trying to find the funds [for college] with two kids is difficult,” he said. “I really appreciate this scholarship from the Kiwanis Foundation and the opportunity to go to school.”

Sweezy, who has been tinkering with cars since he was 12 years old, said he enrolled in Pitt’s AST program because he enjoys working with his hands and wanted to pursue a career doing something he loves. He said a career in the automotive service industry would combine his love of cars with his talent for repairing them.

The Ricks Scholarship Sweezy received was established with the PCC Foundation through funding from Ed Ricks’ family. It is awarded annually to a second-year AST student at Pitt.

“(The scholarship) has been a huge help to a lot of people,” said PCC AST Department Chair Norman Lilley. “We absolutely appreciate the support we’ve received from the Greenville Golden K Kiwanis Foundation over the years.”

Ricks once operated a service station in Greenville on the corner of 9th and Evans streets. He is remembered by friends as being committed to helping young people succeed and dedicated to excellent automotive service.

After graduation, Sweezy says he hopes to work at a car dealership. His long-term plan is to move into the classroom to teach automotive courses.