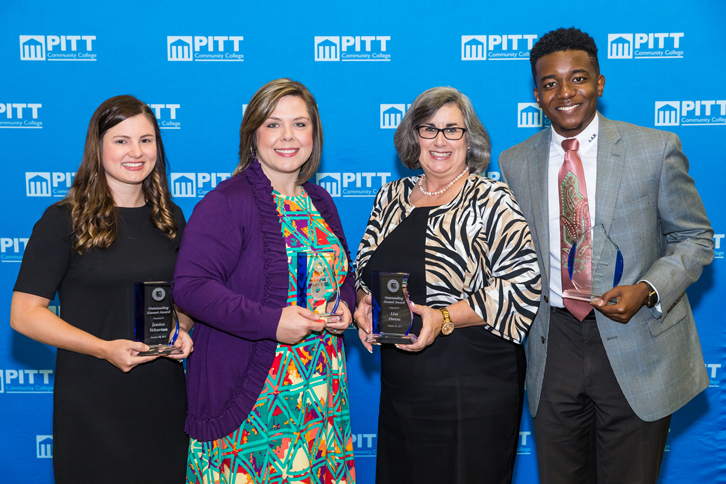 During an Oct. 10 reception, the PCC Alumni Association presented awards to Jessica Yelverton, Jennifer Smith, Lisa Owens and La’Quon Rogers, left to right, for their success professionally, in the community and in service to the college.

WINTERVILLE—The Pitt Community College Alumni Association honored four outstanding graduates this fall for their accomplishments professionally, in the community and in service to the college.

“It is an incredible feeling to present awards to individuals that care so much about others and helping their community,” he said. “We appreciate you and all that you do and are thrilled to call you ‘PCC alumni.’”

Carrere said Outstanding Alumni Awards are given in recognition of exceptional achievement and service to a profession, civic affairs, and/or PCC. The Young Alumni Award, he said, honors a recent student for bringing honor to the college through remarkable achievement professionally, in public service and/or volunteerism.

Owens, who earned an associate degree in Human Resource Management, is Hubert Vester Honda’s customer relations manager. The consensus among the many individuals who nominated her for an award is that “she’s a wonderful person.”

An active member of her church and community, Owens opens her home to college students for food and fellowship each week. She also chairs a number of community events and serves with several charitable organizations, including the March of Dimes and Greenville Orchestra Boosters.

A 2005 Early Childhood graduate, Smith continued her studies at Mount Olive University and earned a bachelor’s degree. She now works as a pre-kindergarten teacher at Winterville’s W.H. Robinson Elementary School, where her creativity and love for teaching led to her selection as the school’s 2017 Teacher of the Year. She is also a finalist for Pitt County Teacher of the Year honors.

Smith nominators noted her unique method of engaging students each morning and emphasis on kindness. She gives back to PCC by mentoring current Early Childhood students and allowing them to intern in her classroom.

If she is not at school or attending a student’s activities, Smith can often be found volunteering with local organizations. After Hurricane Matthew struck in 2016, she gathered dozens of books from her personal collection and read to children at a Red Cross Shelter established at E.B. Aycock Middle School. She also donated clothing, shoes, food and money to those affected by the storm.

Yelverton earned an Associate in Nursing Degree from PCC before working at Vidant Medical Center. She later completed a bachelor’s in nursing at East Carolina University and is currently on track to finish a master’s degree in May to work as a neonatal nurse practitioner. In addition to being a student, she is a well-respected and trusted neonatal care flight nurse with the East Care Children’s Transport Team at Vidant.

Yelverton says she discovered her calling after caring for a child diagnosed with progeria, an extremely rare genetic disorder that causes children to age rapidly. The experience left her wanting to help improve the quality of life for critically ill children in Pitt and surrounding counties.

A 2015 University Transfer graduate, Rogers has compiled a lengthy list of accomplishments in a short period of time. PCC VISIONS Director Marianne Cox nominated Rogers for his award, saying “he has distinguished himself more in his 23 years of life than most people do in an entire lifetime.”

Rogers came to PCC through VISIONS, which is a unique mentoring, career guidance and scholarship program for select Pitt County high school students. At PCC, he served as a student ambassador for two years and president of the Student Government Association during the 2013-14 academic year. He joined the N.C. State Board of Community Colleges the following year, after being elected president of the N.C. Comprehensive Community College Student Government Association.

Through hard work in the classroom and with many campus and state organizations, Rogers earned numerous awards and accolades. He was PCC’s N.C. Community College System Academic Excellence Award recipient in 2014 and the community college system’s Gov. Robert W. Scott Leadership Award winner in 2015.

After graduation, Rogers transferred to ECU, where he has continued to excel in the classroom and on campus. Despite majoring in both business administration and political science, he ran for president of the university’s Student Government Association and was elected for the 2017-18 academic year.

“La’Quon’s accomplishments are a reflection of his passion for others, his drive for success and his intentionality in making a difference in this world,” Cox said, adding that Rogers can be found preaching on Sundays as an ordained elder of the United American Free Will Baptist Church.

Each of this year’s alumni award recipients was nominated for the honor and selected by a special committee, based on criteria established by the PCC Alumni Association Board.