VISIONS Recruiting Next Crop of Students 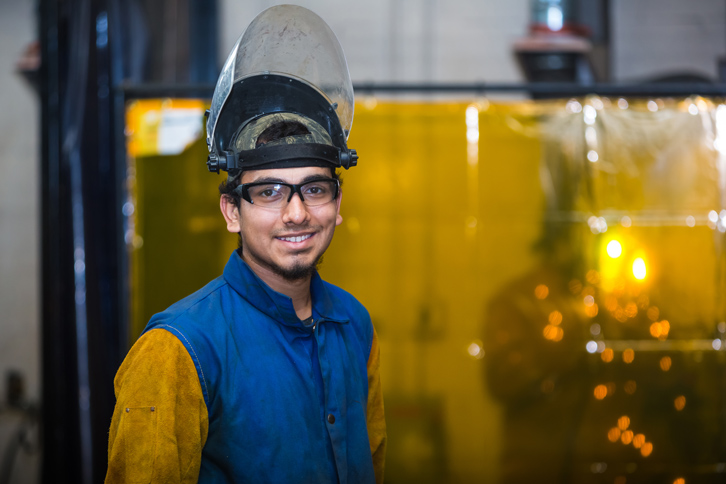 Osiel Aguirre, an Ayden resident, has excelled in PCC’s Welding Technology program, having earned Dean’s List honors in the fall of 2016 and again in the spring. A VISIONS student, Aguirre has a 3.88 GPA at Pitt.

Started in 2004 to help improve Pitt County’s high school dropout rate, VISIONS is the product of a partnership between the PCC Foundation, Eddie & Jo Allison Smith Family Foundation, and Pitt County Schools. Students accepted into the program receive the support and guidance they need in order to complete high school, enroll in higher education, and join the local workforce.

In the program’s 13-year history, nearly 100 percent of VISIONS participants – 703 of 706 between 2005 and 2017 – have graduated from high school, according to VISIONS Program Director Marianne Cox.

“VISIONS is truly a unique program, not only in the North Carolina Community College System but the state, in general, in terms of funding and support,” Cox says. “More than a decade after it began, the program continues to achieve its mission of reducing high school dropout rates and helping students make the transition from high school to college and/or work.”

To be considered for VISIONS, students must have a grade point average between 2.0 and 3.2. PCC VISIONS High School Technical Coordinator Jim Shallow says financial need, disciplinary records and career interests are also factors.

“We’re looking for students who may not have an opportunity to go to college after high school graduation without assistance from VISIONS,” Shallow said. “They may be first-generation college students or considered ‘at-risk,’ but ultimately they have the drive and desire to better themselves and become successful professionally and in the community.”

Osiel Aguirre, a 2016 Ayden-Grifton High School graduate, is in his second year of the welding program at PCC. He says VISIONS helped him establish an educational path to become a welder.

“One of the main reasons I wanted to be in VISIONS was because of an inspirational speech and the excitement Jim Shallow showed me when he came to me and introduced himself,” Aguirre said. “[He said] VISIONS wasn’t just going to help out financially but also help me transition from high school life to college life ….”

While in high school, VISIONS participants receive mentoring, tutoring, and academic and personal advising from PCC staff, who monitor students’ academic progress by visiting their schools and meeting with them one-on-one and in group settings. They also arrange seminars for students on important topics, like goal-setting, test-taking skills, and applying for federal financial aid.

VISIONS students who enroll at PCC after high school graduation receive personal and academic counseling at the college in addition to $1,000-scholarships ($500 per semester). The students can renew their scholarships for a second year as long as they maintain a 2.3 GPA or better throughout their first year of college.

Due to VISIONS’ success, Herman Simon, a key figure in the creation of the program, and the Eddie & Jo Allison Smith Family Foundation have increased funding to allow more students to participate. To date, VISIONS has served 813 Pitt County students.

For additional information on the VISIONS application process, contact PCC VISIONS High School Coordinator Rebecca Warren at (252) 493-7501 or rwarren@email.pittcc.edu. Applications are available on the PCC website and in career development coordinator/student services offices at each of Pitt County’s six public high schools.