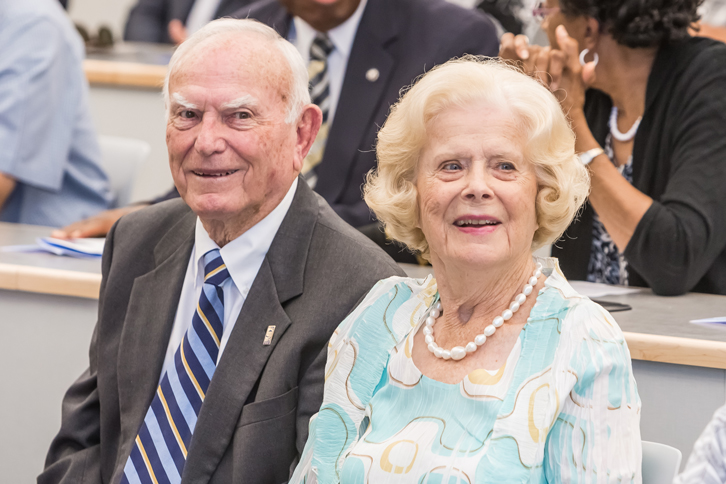 Growing up on a Pitt County Farm, Walter Williams learned early on that hard work and supporting one’s family are essential to a successful life.

Throughout a successful career as founder and former owner of Trade Mart—a chain of more than 100 gas stations and convenience stores—he practiced a tradition of giving back to his community in order to help other people succeed. Walter and his wife, Marie, have been recognized throughout eastern North Carolina as two of the region’s most generous citizens.

Several years ago, when the Baptist Children’s Homes of North Carolina (BCHNC) honored Walter and Marie Williams, the organization summed up the couple’s dedication to helping others.

“Early in life, Walter Williams adopted a formula that defines who he is: love God, work hard and bless others,” BCHNC concluded. “Walter and his wife, Marie, have dedicated themselves to using their resources to give hope to others, especially children and young adults. As a rookie teacher, then a businessman, and founder of his own business, Walter believes in investing in people by doing the right thing and giving generously.”

Both Walter and Marie attended East Carolina Teachers College (now East Carolina University) in the 1950s. Walter graduated in 1951 with a bachelor’s degree in health and human performance before returning to obtain a master’s in education supervision four years later. Marie received an education degree in 1953. It should go without saying the couple places a high value on education.

The Williams’ legacy of supporting education is highlighted by their financial support of ECU’s student-athletes, athletic facilities, endowed scholarships and student leaders. They’ve also helped create educational opportunities for those who may never have pursued them otherwise through their backing of the university’s Supporting Transition and Education through Planning and Partnerships (STEPP) program.

Walter and Marie Williams have also contributed to Pitt Community College’s facilities and student scholarships, and they actively participate in many PCC activities. Walter served on the college’s Board of Trustees from 2005 to 2017 and co-chaired Pitt’s successful “Futures First” capital campaign in 2008.

“Walter and Marie Williams have personally volunteered their time and energy to PCC Foundation fundraising activities, and their financial contributions and leadership have encouraged other donors to support the college,” says PCC Vice President of Institutional Advancement Susan Nobles. “We are so appreciative of their personal and financial support for PCC and our students’ success. They are dear friends of our college.”

On Aug. 2, PCC trustees and administrators dedicated the college’s newest academic building in honor of Walter and Marie Williams. The 78,000-square-foot facility is the largest on campus and serves as the home of Pitt’s Science, Technology, Engineering and Mathematics (STEM) programming.

Along with expanding science and math offerings, Massey says the Williams Building has freed up space for other educational programming, particularly health sciences, while allowing the college to increase its commitment to University Transfer offerings and training that benefits area pharmaceutical businesses. It also houses the college’s Industrial Systems Technology program and has allowed PCC to move its biotechnology program to campus. The college had been utilizing the Pitt County-owned Tech Enterprise Center of Eastern North Carolina for biotech training, an arrangement that was supposed to have been short-term when it was made 14 years ago.

“It’s a welcome addition to campus and will be a tremendous asset for many years to come,” he said. “Additional teaching space has been a need at PCC for quite some time and this facility will make a positive impact that is felt across campus.”

For more information on how you can support the Pitt Community College Foundation, call (252) 493-7210.