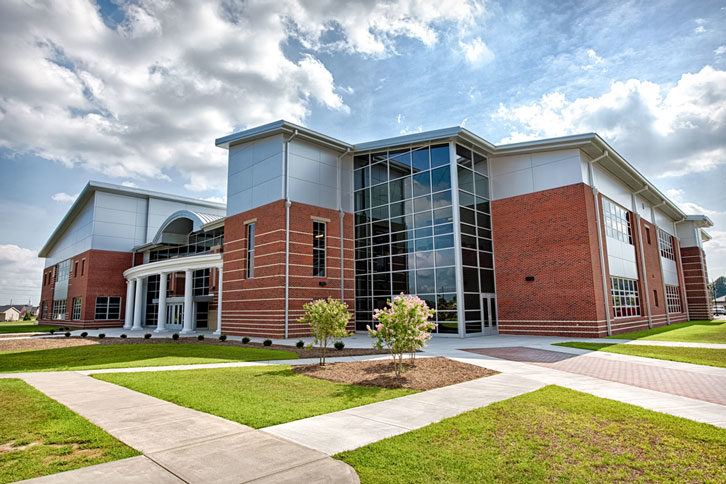 PCC dedicated the Walter and Marie Williams Building on Aug. 2. Following a 3 p.m. ceremony in the building’s Max Ray Joyner Auditorium, there was a reception and tours of the science and technology training facility.

WINTERVILLE—Nearly two years after breaking ground at the site of its future science and technology training facility, Pitt Community College dedicated what is now known as the Walter and Marie Williams Building.

As construction of the largest building on PCC’s campus wound down, college administrators scheduled a ceremony for Aug. 2 at 3 p.m. to officially dedicate the Williams Building. The event took place in the 78,000-square-foot structure’s Max Ray Joyner Auditorium.

“The Williams Building is a welcome addition to campus and will be a tremendous asset for many years to come,” Owens said. “Additional teaching space has been a need at PCC for quite some time and this facility will make a positive impact that is felt across campus.”

Owens said PCC received the Certificate of Occupancy on the Williams Building in July. Staff had already begun moving furniture and equipment into the facility, he said, adding that it will be ready for students and instructors when the 2017 Fall Semester begins Aug. 17.

Named for longtime PCC Trustee Walter Williams, a local businessman and philanthropist, and his wife, Marie, the Williams Building now serves as the home of Pitt’s Science, Technology, Engineering and Mathematics (STEM) programming. The facility features 10 classrooms, a biotechnology center, a STEM learning center, a science tutorial center and 11 laboratories, in addition to the 120-seat Joyner Auditorium.

PCC President G. Dennis Massey says the college and community will benefit greatly from the addition of the Williams Building. Along with expanding science and math offerings, he says it will free up space for other educational programming, particularly health sciences, while allowing the college to increase its commitment to University Transfer offerings and training that benefits area pharmaceutical businesses.

Massey says the building will also house the Industrial Systems Technology program and allow PCC to move its biotechnology program to campus. The college had been utilizing the Pitt County-owned Tech Enterprise Center of Eastern North Carolina for biotech training, an arrangement that was supposed to have been short-term when it was made 14 years ago.

By moving biotechnology to the main campus, PCC Biotechnology Department Chair Christy Weeks says the program can admit more students and access additional equipment for training. She says it will also allow the college’s science-related programs to more efficiently utilize resources and makes it easier for biotech students to get to their general education and elective courses.

The Williams Building, which cost $16 million to build and equip, is located on Warren Drive, behind the Charles E. Russell Building and across the street from the Craig M. Goess Construction and Industrial Technology Building. Funding came through a $19.9 million-bond Pitt County voters approved in 2013 – part of which was used to purchase a building near campus for law enforcement training – and a $2 million-U.S. Economic Development Administration grant.

Designed by JKF Architecture’s John Farkas, Farmville-based Farrior & Sons, Inc., began construction of the Williams Building in the fall of 2015. It is the 18th building on the PCC main campus.