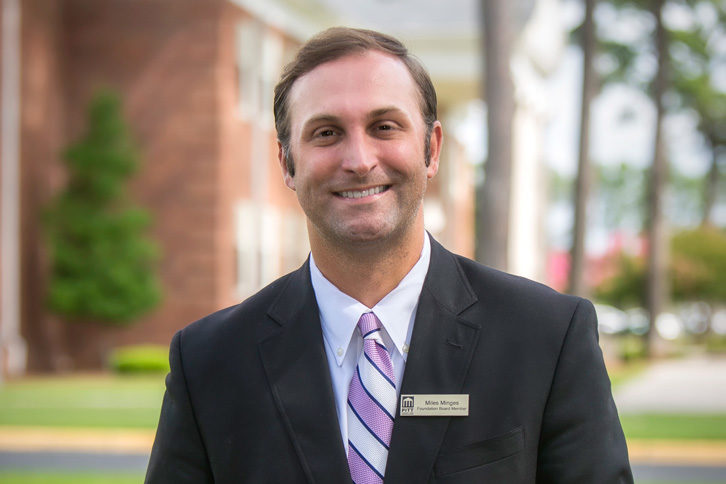 Miles Minges, who works for the Minges Bottling Group in Ayden, has been elected chairman of the PCC Foundation Board for the 2017-18 academic year.

WINTERVILLE—A pair of key leadership boards at Pitt Community College have new leadership for the 2017-18 academic year that began July 1.

During their May 23 meeting, PCC Trustees selected Dr. Peter Kragel to serve as their chairman. The PCC Foundation Board, meanwhile, selected Miles Minges as their chair.

“We are fortunate indeed to have such strong leadership from our trustees, Foundation Board, county commissioners, and key community and campus individuals,” PCC President G. Dennis Massey said.

Kragel, a doctor with the East Carolina University Brody School of Medicine’s Department of Pathology and Laboratory Medicine, takes over for Charles Long, a retired Pitt County Schools administrator from Farmville who has served as chairman for the past three years.

A Greenville resident, Kragel was appointed to the PCC Board of Trustees by the Pitt County Board of Education in 2004. His current term runs through June 30, 2019.

As a trustee, Kragel chaired the board’s Policy/Program Committee from 2009 to 2015. He also serves on the Personnel and Finance/Audit committees.

Serving as vice chair will be Patti Sanders-Smith, a retired Wilson County Schools administrator from Greenville who now works as an adjunct professor at Gardner-Webb University.

Sanders-Smith, who chaired the Policy/Program Committee during the current academic year, was first appointed to the trustees board by the Pitt County Board of Education in 2013. She was recently reappointed for a new term that runs through June 30, 2021.

Don Mills, who most recently served as vice chair of the trustees, will now serve as secretary. The retired NACCO Materials Handling Group manager has chaired the Finance/Audit Committee and serves on the Personnel Committee. He is also the board’s liaison to the PCC Foundation Board.

The Pitt County Board of Education recently reappointed Mills to the PCC Board of Trustees for a four-year term.

Minges, who is the key account director at Minges Bottling Group in Ayden, has been a member of the PCC Foundation Board since 2011. Prior to being elected chairman, he had served as vice chair of the board that oversees PCC’s chief fundraising organization for the past four years.

The newly-elected officers will join Diane Waters, Vidant Medical Center purchasing director and immediate past chair of the Foundation Board, and PCC Foundation Executive Director Susan Nobles on the board’s executive committee.

In the past year alone, Nobles said the PCC Foundation funded more than $283,000 in scholarships and another $280,000 in support of the college’s academic programs and services.