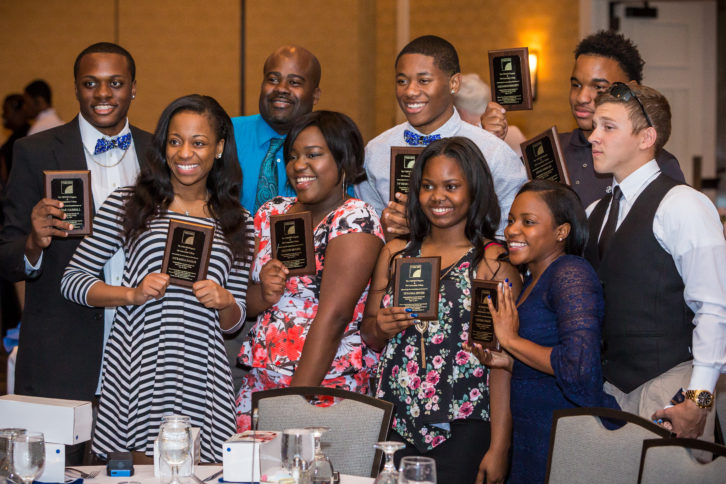 VISIONS students received plaques in recognition of their successful completion of program requirements.

The annual event, which took place May 15 at the Hilton Greenville, featured award presentations and words of encouragement from VISIONS staff and representatives from key VISIONS partners – the PCC Foundation, Eddie & Jo Allison Smith Family Foundation, and Pitt County Schools.

Each year, VISIONS provides a select group of Pitt County high school students with the direction and support they need in order to earn their diplomas and move on to higher education. Between 2005 and 2016, 616 of 619 VISIONS students graduated from high school. Another 85 are expected to graduate next month.

PCC VISIONS Program Director Marianne Cox says the celebration is a chance to honor students for their hard work in meeting high school and VISIONS responsibilities. It is also a time, she said, to recognize everyone involved with making VISIONS successful.

Most of the student honorees will now move on to PCC, where they will receive scholarships and continue receiving personal and academic counseling from college VISIONS staff.

Whether the students opt to pursue higher education, enlist in the military or join the workforce, PCC VISIONS College Coordinator Steffen McGhee challenged them to take responsibility for their success, reach the goals they’ve set for themselves, and seek assistance from VISIONS staff immediately, if it is ever needed.

“I hope you are even more excited than I am to see what’s in store for each of you,” McGhee said. “My last challenge is for you not to be immobilized by fear and get caught window shopping on the ‘what-ifs.’”

A pair of former VISIONS students who made the most of their experience with the program and graduated from PCC shared their success stories and assured the students preparing to enter higher education that they would be in good hands at the college.

One of those students, Ayden-Grifton High School graduate Diane Garcia, earned an associate degree from PCC in Advertising and Graphic Design in 2016. Garcia spoke fondly of her time at Pitt and said her next step toward a career as a magazine writer will be enrolling at Barton College to pursue a bachelor’s degree in journalism.

Trayvone Barnes, a 2013 Farmville Central High School graduate with an associate degree in criminal justice from Pitt, was also scheduled to speak during last week’s celebration but could not due to his new job as an officer with the Wilson Police Department. Instead, Cox read a speech Barnes had prepared for the event in which he spoke about how VISIONS had supported him in high school and college.

“To all the seniors now becoming freshmen in college, I would encourage you to stay focused and work hard to get what you want,” Barnes wrote. “The VISIONS program is like a family with an entire network of current and former students.”

Barnes also thanked the organizations and individuals who have supported VISIONS financially.

“… To all those who have given to the VISIONS program, I say ‘thank you,’” he said. “I would not have been able to attend college without your support. You have made a difference in my life and many others.”

While all of the soon-to-be graduates received plaques commemorating their completion of the VISIONS high school program, 39 earned special recognition for having GPAs of 3.0 or higher (weighted or unweighted) midway through the current academic year. Of those students, Ayden-Grifton’s Valerie Juarez had the highest GPA (an unweighted 3.62) and received a Herman Simon Award, which is named for a key figure in the creation of the VISIONS program.

The 45 students who completed college courses at PCC through the Career and College Promise program while they were still in high school also received recognition, as did the 11 who bettered their high school GPAs by at least two-tenths of a point since joining VISIONS in 2015. Two students, D.H. Conley’s Efua Jones and J.H. Rose’s Shella Satur received Simon Awards for raising their GPAs by a quarter of a point.

Through a contribution from Wells Fargo, brothers Dylan and Trent Harris were awarded $250-scholarships to help pay for their tuition and fees at Pitt. The twins excelled at D.H. Conley with GPAs higher than 3.0. They also recorded GPAs better than 3.6 in nine classes that they completed at PCC while still in high school.

“Dylan and Trent not only excel in the classroom but also in the community by serving as volunteers with their local church,” said PCC VISIONS High School Coordinator Rebecca Warren. “They never leave a VISIONS seminar without asking what they can do to help or simply just to say ‘thank you.’”

Prior to the presentation of awards, South Central High School student Myranda Harris showcased her talent and passion for dancing, which she says has helped her step out of her comfort zone. “… When I dance, I feel like I’m in a whole new world,” she said.

Started in 2004 to help reduce Pitt County’s high school drop-out rate while increasing the number of county students attending college, VISIONS has served more than 800 students. Due to the program’s success, Simon and the Smith Family Foundation have increased funding to allow more students to participate.

This year’s VISIONS class was comprised of 85 students representing all six Pitt County public high schools. All of the students were selected for participation during their junior year and received special mentoring and advising from PCC staff as seniors. Last summer, the students took part in a program at PCC to learn more about educational and career options available to them locally.