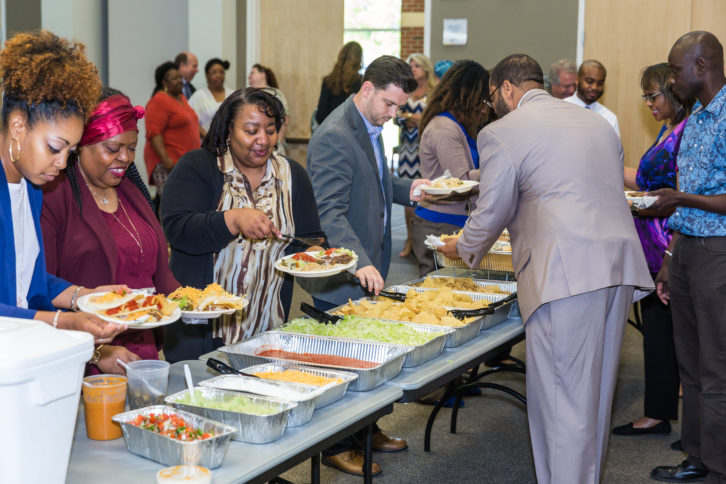 More than 70 volunteers participated in the PCC Foundation Volunteer Appreciation Luncheon, which was catered by Fajitas Mexican Restaurant.

WINTERVILLE—The Pitt Community College Foundation took a moment this spring to thank its many volunteers for their contributions at three key fundraising events in 2016.

During a luncheon for the volunteers in the Goess Student Center April 27, PCC Vice President of Institutional Advancement Susan Nobles said more than 300 volunteers helped the PCC Foundation raise money last year. She thanked them for freely giving their time and efforts to ensure the success of PCC’s chief fundraising organization.

“We can’t afford to pay you, but we cannot afford not to have you,” Nobles told the more than 70 volunteers on hand for the luncheon. “We could not do what we do without you, and I sincerely mean that.”

PCC Event Specialist Erin Greenleaf said volunteers contributed a combined 1,057 hours assisting the PCC Foundation during its 2016 Accelerating the Future, Fall Golf Classic and Down East Holiday Show fundraisers. Those events, she said, generated more than $166,500 for student scholarships and educational activities at the college.

“The key to successful events lies with the volunteers,” Greenleaf said.

Since 2007, the PCC Foundation has provided more than $13.4 million in support of the college’s mission to educate and empower people for success. Its three major areas of contributions to PCC are scholarships, program support and capital projects.

One of the Foundation’s primary goals is to assist the college’s efforts to increase student success through retention and program completion. Within the past year, more than 900 Pitt students have received scholarships and/or special educational assistance funds from the charitable organization, helping them remain at the college to achieve their educational goals.