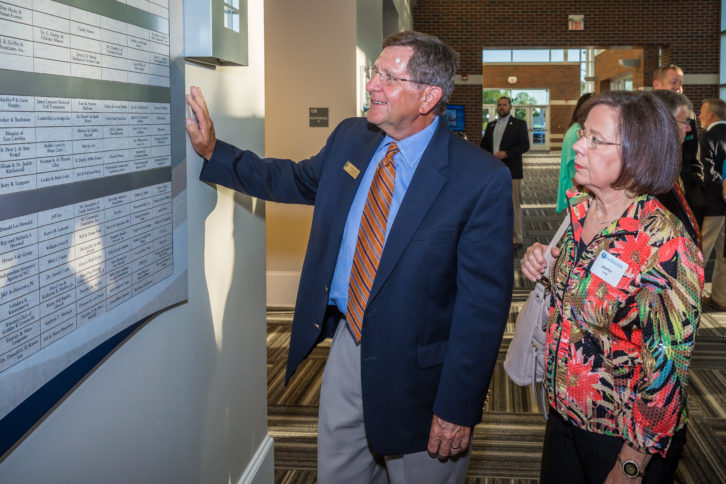 PCC Board of Trustees Chairman Charles Long and his wife, Jeanine, read the names of donors who have supported the PCC Foundation.

WINTERVILLE—The Pitt Community College Foundation thanked supporters May 2, during a special event on campus that featured the unveiling of a donor recognition plaque in the Craig F. Goess Student Center and the announcement that the building’s multipurpose room has been named for the late J. Paul and Diana S. Davenport.

During the Distinguished Donor Reception, PCC Vice President of Institutional Advancement Susan Nobles thanked attendees for supporting Pitt students and the college’s mission to educate and empower people for success.

“You are very special to us, because you have helped us make a positive difference for our students and our college,” Nobles said. “… Every ticket sold, every event sponsorship, every dollar contributed, every scholarship developed, and every in-kind gift provided from you, our distinguished donors, has been used to support our students’ success.”

In the past year, Nobles said contributions to the PCC Foundation have funded more than $283,000 in scholarships and another $280,000 in support of the college’s academic programs and services.

“Together, we have been able to open doors of educational opportunity for hundreds of students to attend and complete college,” Nobles said, adding that one of the PCC Foundation Board’s current goals is to recognize and thank donors.

The donor recognition plaque is part of that effort. The tribute includes the names of those who have supported the PCC Foundation through annual contributions, cumulative contributions, endowments, planned legacy gifts and other gifts.

“This plaque will be a work in progress, changing annually to reflect the many ways our donors support our students’ success,” Nobles said.

Paul and Diana Davenport, who were tremendous advocates and volunteers for PCC, will be remembered for many years to come now that the multipurpose room bears their names. In addition to meetings and new student orientation sessions, the facility hosts numerous special events each year, including the college’s Academic Excellence Awards, Scholarship Reception and PCC Spring Career Fair.

Paul Davenport, a retired U.S. Air Force officer and partner to one of the largest agricultural enterprises in Pitt County and eastern North Carolina, served on the PCC Board of Trustees for more than 10 years, including two years as chairman. He was also a PCC Foundation Board member before he passed away in 2016, just weeks after receiving a Distinguished Service Award from the college.