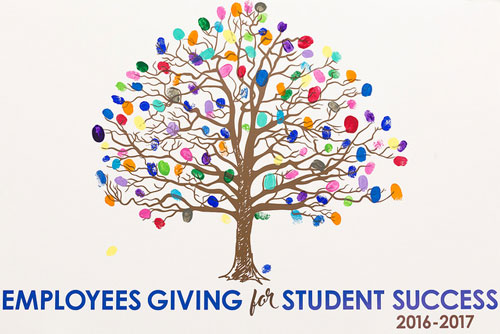 WINTERVILLE—The Pitt Community College Foundation had much to be grateful for this Thanksgiving, as the charitable organization’s three fundraisers this fall combined to generate more than $220,000 for student scholarships and educational activities.

Fundraising began shortly after the start of the new academic year with the Employee Annual Fund Drive. During the month of September, the campaign netted more than $92,000 in contributions and payroll deduction pledges from PCC faculty and staff, surpassing the drive’s $80,000-fundraising goal.

“The generosity of my fellow employees is inspiring — not only because we collectively want to do what we can to meet the financial needs of those we serve but because we’re collectively investing in the future of our students, our college and our community,” Carrere said.

On Sept. 15, the Foundation held its annual Fall Golf Classic. Sunny skies and warm temperatures greeted the golfers who came out to Greenville Country Club for this year’s tournament, which generated close to $19,000 for the benefit of PCC students.

“Year after year, we count on our community coming together at the Down East Holiday Show and making it the success that it is,” said PCC Events Specialist Erin Greenleaf. “Whether as an exhibitor, a sponsor or as a shopper, we are so grateful for those who made a difference in a Pitt Community College student’s education through their support.”

According to PCC Vice President of Institutional Advancement Susan Nobles, more than 325 students are receiving scholarships through the PCC Foundation this fall. The organization, she said, is expected to award at least another 100 scholarships during the spring semester.

Nobles, who also serves as executive director of the PCC Foundation, said the organization has already provided $184,000 in scholarships to Pitt students this semester and is expecting to award another $217,000 in the next. She noted that 60 percent of the funding has been awarded to returning students to support retention and program completion.

Scholarships, Massey said, also support student achievement. He noted PCC’s emphasis on student completion and said the college had awarded 2,420 degrees, diplomas and certificates during the 2015-16 academic year – the most ever for PCC in a single academic year.

The PCC Foundation’s fundraising endeavors will continue during the spring semester with the annual “Accelerating the Future” program. The Feb. 24 event will take place at Rock Springs Center in Greenville.