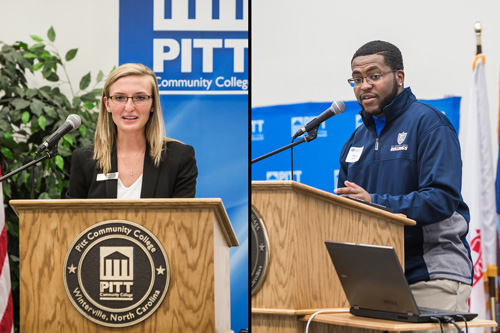 Each year, the PCC Foundation awards scholarships to students in recognition of outstanding academic achievement and financial need. It also provides a limited number of grants-in-aid and special funding for educational supplies.

According to PCC Vice President of Institutional Advancement Susan Nobles, more than 325 students are receiving scholarships through the PCC Foundation this semester. The organization, she said, is expected to award at least another 100 scholarships in the spring.

Nobles, who also serves as executive director of the PCC Foundation, said the organization has already provided $184,000 in scholarships to Pitt students this fall and is expecting to award another $217,000 in scholarships next semester. She noted that 60 percent of the funding has been awarded to returning students to support retention and program completion.

“I’m really proud of what the PCC Foundation is doing to serve the college and its students, and I’m very appreciative of the support we receive from our donors, who are committed to seeing our students succeed,” Nobles said.

In addition to scholarships and endowments established and supported by individuals and organizations, much of the PCC Foundation’s funding is generated through various activities, including the Down East Holiday Show, Fall Golf Classic and Accelerating the Future. This year’s Employee Fund Drive, which took place in September, raised $92,000 for student scholarships and educational activities at the college.

Scholarships, Massey said, also support student achievement. He noted PCC’s emphasis on student completion and said the college had awarded 2,420 degrees, diplomas and certificates during the 2015-16 academic year – the most ever for PCC in a single academic year.