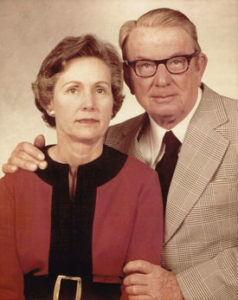 WINTERVILLE—The Pitt Community College Foundation announced this month it has established a new endowed scholarship through a $400,000-planned gift from the Linwood and Vannie Rouse Estate.

According to Susan Nobles, PCC Vice President of Institutional Advancement, the Linwood and Vannie Rouse Scholarship will be awarded annually to an outstanding Pitt County high school graduate with financial need during the recipient’s first year of enrollment at PCC. The funds may be used to assist with payment of tuition, fees, and educational supplies and materials.

“This very generous gift will provide scholarships for many years to local students who attend Pitt Community College,” Nobles said. “We are very appreciative that this local couple recognized the value of education and established a planned gift to support the continued success of our Pitt County students.

“We know that Linwood and Vannie loved this community,” she continued. “They were hard workers in business as well as in community, civic and church activities. They loved helping people, and we are honored that they chose to help and support the success of our students.”

A Winterville native, Linwood Rouse was a member of the U.S. Navy Seabees during WWII. While stationed on Guadalcanal, his father sent him books on construction, which helped him obtain his license in the field upon his return home.

Rouse, who passed away in 1993 at age 78, established Rouse Construction Company and built numerous homes, commercial buildings and churches in the Pitt County area over the years.

A leader in the Winterville Kiwanis and Ruritan clubs, Rouse was a superb cook who used his talents to host large-scale fundraisers for civic clubs and churches. He served a term on the Pitt County Memorial Hospital Board in the 1970s and was an active member of Winterville Christian Church.

Vannie Rouse, who was raised in Sanford, was a child of the Great Depression who left school early to take care of her invalid mother and help raise her five siblings. She worked at various jobs in Sanford and Mount Airy. Though her lack of formal schooling never blocked her desire to learn and succeed, it helped Vannie create an acute appreciation of the value of an education.

Vannie married Linwood in 1969 and moved to Winterville. Like Linwood, she was very active in church and civic affairs. The couple liked to travel and would pull off the interstate at various destinations and spend several hours making new friends among the local citizenry.

Throughout her life, Vannie made friends of all ages, along with the children of those friends. She forged a very strong relationship with Sonja Blalock (her “adopted daughter”) and godson Frank Blalock that continued right up to her passing in April of last year at age 93 in Sanford.

Unable to have children of her own, Vannie became a second mother and grandmother to those of her many friends. She always stressed the importance of a good education and the value of a strong work ethic.

Despite her success and many friends, Vannie felt the lack of a formal education had left a void in her life. She was very supportive of anyone continuing their schooling, and that interest led her to make arrangements to create several perpetual scholarships across the state. As a result, Vannie will impact the lives of children across North Carolina for many years to come.