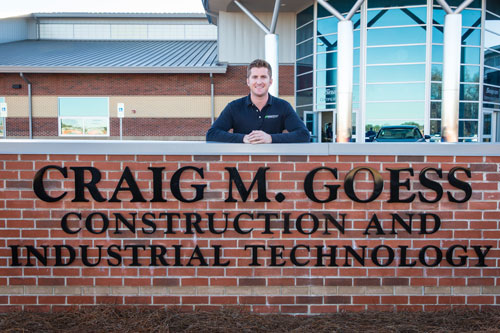 Earlier this year, PCC Trustees voted unanimously to name the building for Goess after the Goess Family made a sizeable donation to the PCC Foundation. The contribution, according to PCC Vice President of Institutional Advancement Susan Nobles, was a continuation of the Goess Family’s long-term support for the college.

Craig M. Goess is the son of Greenville Toyota owner Craig F. Goess. PCC named its student center for the elder Goess in 2008.

Today’s naming ceremony took place at 3 p.m. in front of the CIT Building, which is located on Pitt’s main campus, west of Reedy Branch Road.

“I feel very humbled and honored to have a building named after me, especially at the place that I attended for college,” Craig M. Goess said. “I think it’s very important in today’s time, with all the technology that cars have today, for anyone interested in mechanics to invest the time and money into getting a college degree and training for that field. It will put them above those who don’t and offer them many more options with much better earning potential.”

A native of Woodbury, N.J., Craig M. Goess has lived in Greenville for 16 years and is currently general manager of Greenville Toyota. The 34-year-old graduated from Parrott Academy before earning an associate degree in Business Administration: Marketing and Retailing from PCC in 2002.

“I washed cars at age 13 during summers and started as a salesman [at Grenville Toyota] when I was 18,” Goess said. “I’ve been in management now for 11 years.”

Goess, who served for more than two years on the PCC Foundation Board, is also a former professional race car driver who competed in several racing series, including two seasons in the NASCAR Camping World Truck Series. In 2011, he raced in nine Truck Series events with his highest finish being ninth at Nashville Superspeedway.

“I have so many great racing memories for different reasons, but if I had to pick one, I’d say my favorite racing memory is winning the ARCA race in 2010 at Pocono Raceway,” Goess said.

Goess stepped away from racing after the 2011 season and focused his attention on Greenville Toyota. He assumed the role of general manager in August 2012 and said his PCC education helped prepare him for some of his new responsibilities.

“Nothing can really prepare you for what the car business entails until you’re in it, but my education at PCC helped me be more aware of the advertising and merchandising side of the business,” he said.

In addition to closing deals and appraising, buying and wholesaling cars, his job as general manager also requires him to oversee personnel, handle customer issues, maintain the company’s website and keep up with inventory.

“I am fortunate to have had the best teacher anyone could have for this business in my dad,” he said. “The learning process is a constant, and I will never stop learning, as this is a changing business and one has to adapt and change with it to continue to be successful.

“We are fortunate to have many great people that are part of our team here, that have been here a long time, and without many of them we would not be as good of a company as we are today,” he continued. “Many of them are like family, and that is a good feeling to have coming to work every day.”

The 57,796-square-foot building that will bear the name of Craig M. Goess opened to students in 2012 and is currently PCC’s largest. It is home to the college’s Automotive Systems Technology and Building Construction Technology programs and features a center hallway that stretches nearly a tenth of a mile, with offices and classrooms on one side and labs and work bays on the other.

Located on Warren Drive, on property the college purchased in 1992 for expansion purposes, the building was constructed with $8.5 million raised through a quarter-cent sales tax increase Pitt County voters approved in 2007.